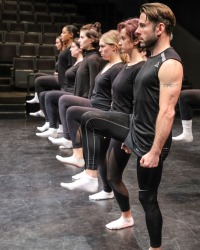 PRODUCING: WHO, WHAT, WHEN, WHERE, WHY, HOW?

Aimed at rising producers and arts administrators of live theatre or performance, this workshop will give you an overview of the job of a producer, the purpose of a producer, as well as the role they play in a project, production, organization, and/or creative process. The first class will be a lecture format, followed by a question-and-answer period. The second class will be a work session and a discussion period. Registration is open to participants who can attend both sessions.

LISA LI (she/her) is an arts manager and theatre producer with progressive 9+ years of experience managing and overseeing a breadth of programming, budgets, and contracts/agreements. Work includes small and large-scale theatrical productions, musicals, concerts, festivals (dance, music, improvisation, literary, family/TYA), tours, cabaret, site specific work, and digital creations. Originally from Toronto, Lisa Li recently relocated to Winnipeg to be the new Managing Director of Prairie Theatre Exchange. Prior to this, she was a Producer with Soulpepper Theatre Company where she was responsible for all Soulpepper produced mainstage productions and live concert programming. She has produced 65+ theatrical productions and concerts for Soulpepper since she took on the position of producer in December 2016. She was the producer on Soulpepper on 42nd Street, Soulpepper’s month long residency at New York City’s Signature Theatre July 2017. Occasionally, Lisa Li works in Toronto’s independent theatre community as a producer and consultant. In 2016 she produced the second of Rob Kempson’s Graduation Plays series, Mockingbird, as part of the Next Stage Theatre Festival. The production set new record highs for festival sales and attendance and earned a Dora nomination for best ensemble cast. The following year she returned to the same production company, timeshare, to produce the final play of the series, Trigonometry, this time as a wholly independent production.